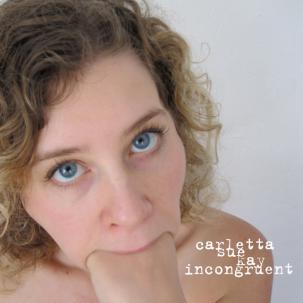 Carletta Sue Kay vocalist Randy Walker is blessed with a four octave vocal range, and writes songs to melt the hearts of even the most cynical. Hailing from a So-Cal hellhole...full of meth, Mexican mafia, the KKK and Hells An- gels, a liberal education in down and out comes through the music unashamedly. Walker’s cousin and band name- sake, Carletta served jail time for attempting to fire bomb her ex-boyfriend’s apartment. Renowned curmudgeon Stephin Merritt of Magnetic Fields says “I love Carletta’s singing. She has an androgyny similar to Nina Simone... but without the bitterness.”

Over the last two years Carletta Sue Kay has been thrilled to share bills with the likes of Kurt Vile, Ariel Pink’s Haunt- ed Graffiti, Girls, The Fresh & Onlys and Kelley Stoltz. After a successful tour of Europe and SXSW 2012, Walker can be heard on The Magnetic Field’s newest record “Love at the Bottom of the Sea” and on an up-coming new project by Sonny Smith of Sonny and The Sunsets.

“Carletta’s lilting bombast, set precipitously and wobbling on the fence between a field of eggshells and a river of knives, would make whimpering birds of the snarling plenties, if they had ears to hear.” —Tim Cohen, The Fresh and Onlys

“Drag Queens lip synch, so don’t let the wigs fool you, this is one of the best vocalists you could ever hear live, the kind of singer that doesn’t even need a mic, the kind of singer that tugs at your heart strings. Great songs and a great band elevate Carletta Sue Kay to an extra-ordinary level of performance. Heart, Soul and Talent, on the grandest levels. I love Carletta Sue Kay” —Christopher Owens, Girls