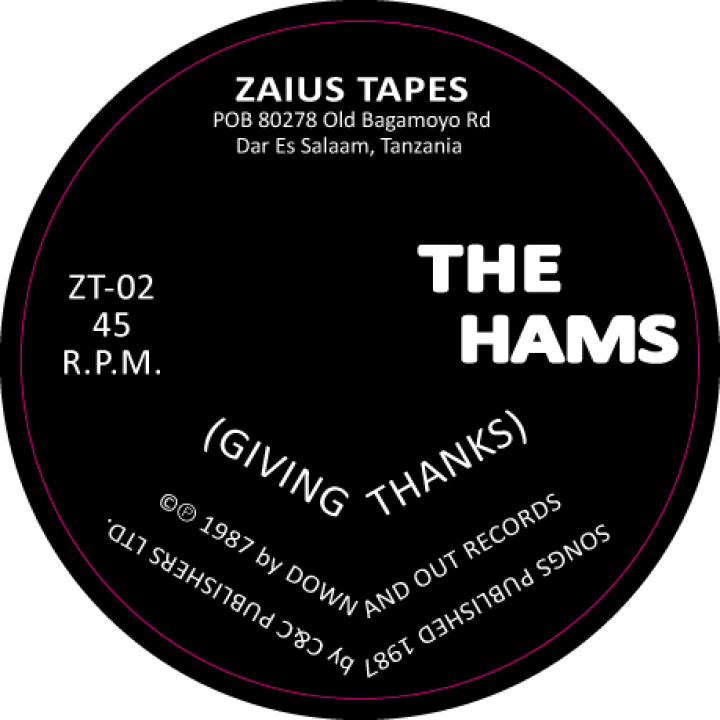 Giving Thanks / Thanks Giving

Zaius Tapes opens 2023 with a reissue that few if any would have predicted. The Hams’ legendary and elusive sole release was promoted — as an exclusive — through Systematic via the backdoor in the summer of 1987 amidst the distributor’s fog of bankruptcy. The Hams’ label, Down And Out, was equally mysterious, having previously released one LP (Prominent Disturbance) and one cassette (The Turks) to little or no fanfare. Since none of the Systematic sales staff at the time have any memory of carrying these titles, the shroud of speculation only enhances their existence. The Hams 12" did receive a hale and hearty endorsement in the pages of Forced Exposure at the time, comparing them to (surprise!) The Smashchords. Accurate enough, let’s face it, there wasn’t a whole lot out there for this to stick to. However, there was no real way to get the thing. Adorned in a plain white disco sleeve, presumably the few that got out into the wild before the Chapter 11 axe came down were as in-store play copies. No one has an idea about how many were originally pressed, either. All of this helping to build its quiddity among collectors. The Smashchords comparison notwithstanding, The Hams 12" is every bit as much of an anomaly. Literally two dudes on guitar and drum, jamming. No vocals, just heart. It could have easily come out on SST in its waning, Byzantine era, sounding like Painted Willie collapsing into a black hole of Turkish barbarism. Or... 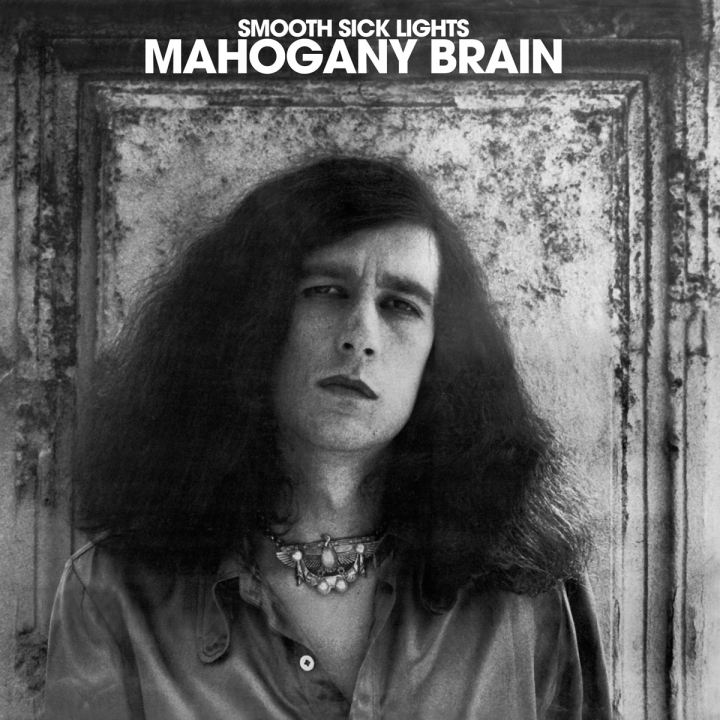 Mahogany Brain forged their unique audio dialect with their debut release, With (Junk-Saucepan) When (Spoon-Trigger) for the legendary Futura label in 1971. More Avant-Garde than Prog, it spoke to the souls of the dedicated one percenters — such as the ESP Disk set — specifically patrons of The Godz and Cromagnon. But in early 1972, Mahogany Brain recorded Smooth Sick Lights, a follow-up release even more bewildering than its predecessor, yet this sat neglected until 1976 when it was issued by the Pole label. It's hard to know what sort of impression it made on anyone beside Steven Stapleton (as his NWW list is how many have been informed of its existence). It had enough allure that the Tapioca label reissued a botched mispress in 1977, which seems to be the version that most latent hep-cats, whom knew not better, got fooled into owning. Zaius Tapes comes to the rescue once again with a stellar reissue of this exemplary diamond in the rough. For fans of the further out '70s French Prog, it goes beyond Red Noise and Fille Qui Mousse. You can see how the brain-beams emitted from this release were studied by Heratius, Gutura, and others. It's possible Smooth Sick Lights even helped inform factions of the New York No Wave (lead guitarist Patrick Geoffois would go on to be a member of both The Contortions and James White & The Blacks). As the bard once penned, "conjecture is nine-tenths of the truth." RIYL; Frolk Haven, Mars, Jandek,... 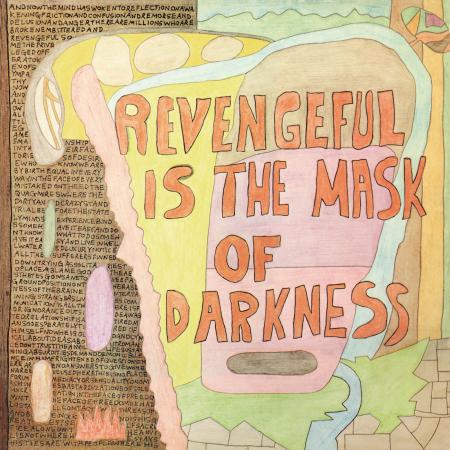 Revengeful Is The Mask Of Darkness

Some 40 years after it’s release, Camp One’s sole album from ’81 remains as mysterious as ever, the quartet of D Jones, I Good, L Williams & P Sage still hiding in plain sight. Ask any deep digger you might know, it seems none of them can shed any light on this stunning, enigmatic LP. There are those who’ve never seen a copy, let alone heard it. Speculation here, an educated guess there, not exactly Captain Kidd's treasure map. ‘Revengeful' doesn’t fit neatly into any niched genre; its almost a Baroque-like, outsider take on Prog Rock & Postpunk at once, eccentricity crackling off it’s grooves. Imagine if you will, the fattier bits of A Moore’s oeuvre, the suet of L Voag + the gristle of Mark Perry, all baked into a most succulent Yorkshire pudding for the ears. Leave it to Zaius Tapes to bring it (back) into the world. Bravo. Edition of 250 copies. RIYL; the Canterbury scene, Murphy Federation, Fuck Off Records. 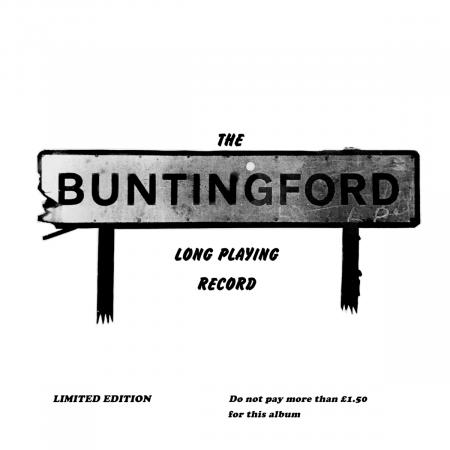 At the dawn of the '80s, The United Kingdom was awash with regional compilations documenting the burgeoning local punk, postpunk, DIY movements that were rampant all over. Rough Trade's seminal, Wanna Buy A Bridge? may have started the fad, but it soon became quicksilver. From Portsmouth ('South Specific'), to Richmond ('The Snoopies Album') to Cardiff ('8 from '80), no local scene was too insignificant. So it should come as no surprise that Buntingford, a small market town in East Hertfordshire, would tag in with one of the strongest, yet most obscure, albums of the era. Comprised of about a dozen or so local youths under different monikers, The Buntingford Long Playing Record sidetracks the punk handle-which was surely a death knell in this bucolic civil parish-but expertly nails a brace of mod, powerpop & DIY tracks. And to a person, it would seem the works here were both their magnum opus & swan song. If this isn't a perfect example of the Protestant Work Ethic in action, I'll gladly eat a spotted dick. Without question, the greatest collection of one & done pop/punk masterpieces from that magical, bygone time. Originally released in 1981, now reissued by the estimable Zaius Tapes label, edition of 250. RIYL; The Messthetics series, the Matchbox Classics label, Johan Kugelberg's top 100 DIY singles list. 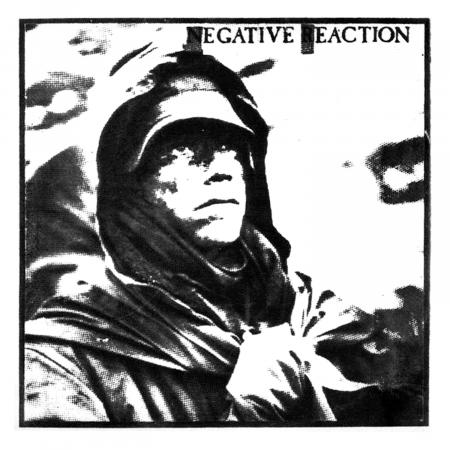 Negative Reaction’s brilliant, lone album was originally released as a cassette for Terse Tapes (Tom Ellard/Severed Heads) then quickly pressed onto vinyl by Dogfood Production Systems (home of the estimable Slugfuckers) so you know the pedigree is tip-top. While you’d be correct in assuming the vibe here is experimental-merely by association-what you might not be prepared for is the most perfect example of dystopian malaise ever released by a band from the (then) burgeoning post-punk movement. It’s easy to forget-or simply not be aware-that in the nascent dawn of the 80’s, specific, niche genres hadn’t been painstakingly carved out. Negative Reaction’s album trods forth across the landscapes of industrial, experimental & minimal, gathering the Cold War gloom, the bleak threat of impending global nuclear holocaust, then forging it all into this S/T masterpiece. Done primarily with recitation, blurred guitar lines, echos & feedback, it’s a harrowing snapshot from the other side of an inevitable apocalypse. It’s beauty is in it’s simplicity; it doesn’t go for the jolt, like SPK, nor does it attempt to shock, like Throbbing Gristle. Negative Reaction go for the sublime, matter of factly & evenly laying down six tracks of impending doom that give “John" & The Book of Revelation a run for it’s money. One of the most pivotal records ever from a bygone era that was teeming with them. Edition of 250. RIYL: The Barons, Plast, Factrix, Prominent Disturbance, Vertical Slit-Slit & Pre-Slit.